All kinds of rumors have been surfacing on the Internet about Google’s new Nexus device, the Nexus 8 (a.k.a. Nexus 9). Most people say that the new Nexus device will be manufactures by HTC, since LG completely denied being a part of this project. The name of Nexus 8 has been seen in a review from a few German developers (Chromium Code Review). Of what we’ve gathered, the Nexus 8 will come with some stunning specs, so let’s see a comparison between the yet-to-be-released device and the Nexus 7.

Google’s Nexus 7 is equipped with an IPS LCD touch screen measuring 7 inches that can render a resolution of 1200 x 1920 pixels. This device comes with an impressive pixel density of 323 pixels-per-inch. The tablet weighs 290 grams and comes with a thickness of 0.34 inches.

The Nexus 8 tablet will come with a larger 8.9 inches touch screen that will render a higher resolution of 2048 x 1440 pixels. The device will have an inferior pixel density to Nexus 7’s, of 241 pixels-per-inch. The Nexus 8 is expected to be significantly heavier, weighing 418 grams, but thinner, being 0.31 inches thick.

While the Nexus 7 already has stunning imaging with sharp contrast and color payoff, we can expect nothing less from the Nexus 8, as Google has always been attentive of these aspects.

Regarding the outlook, we see that the Nexus 7 has a black strip of glass over the screen which blens in perfectly with the rear panel made of rubberized plastic. The Nexus 8 is expected to come with aluminum zero-gap construction, which we didn’t see in its predecessor.

The processor that powers the Nexus 7 is a quad core working at 1.5 GHz paired up with the Snapdragon S4 Pro chipset from Qualcomm. This device comes with 2GB of RAM and runs on Android v4.3 Jelly Bean (upgradable to Android v4.4.3 KitKat).

The processor that is supposed to power the Nexus 8 will be a Tegra K1 (64-bit processor) paired up with a NVIDIA Logan chipset. This tablet will also have 2GB of RAM, but most likely will run on the latest Android version of OS: Android 5.0 Lollipop.

Google’s Nexus 7 can be purchased with two options for internal memory: 16GB and 32GB (there is no microSD slot, hence the memory is not expandable). The tablet is tooled with a Li-Po battery unit with a capacity of 3950 mAh which is estimated to last around 9 hours of multimedia view time. Asus provided the device with a 5MP primary camera, while the secondary camera has 1.2MP.

The Nexus 8 will also come with two options for internal storage space: 16GB and 32GB (the device is expected to come with a microSD card slot, so the memory will be expandable). As for a battery unit, there have been no speculations about what Google will offer its new tablet. What we do know is that the tablet will come with a better 8MP main camera, and also a better secondary camera of 3MP.

Regarding this category, both tablets have the same features: can be purchased in LTE and non-LTE/Wi-Fi only versions and both support NFC.

Currently, the price for the Google Nexus 7 (32 GB) is of $230.00. The price that the Nexus 8 (32 GB) is expected to arrive at is $499.00. While there is quite a difference, the successor of Nexus 7 has upped its game in almost every department, so it may be worth the money. All we have to do is wait for the Nexus 8 to be released, sometime this summer.

Sony followed a different path of smartphone development by introducing a 20.7 megapixel camera in Xperia Z1. The… 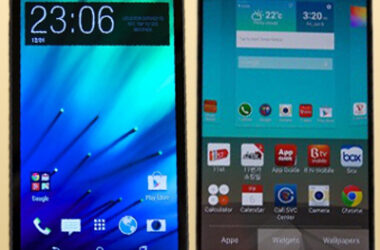