HTC and Apple are the two brands that are hard to be beaten for their brilliant technological advancements, but when we do a comparison of these two, it is a bit baffling to choose from these highly packed devices. Both are outstanding mobiles, but which one has the edge over the other and why? Which would you choose?

The difference between the One M8 and the iPhone 5C is that the HTC handset has a metallic look and comes in three shades: Amber Gold, Glacial Silver and Gunmetal Green, while the Apple model has a plastic body and the colors of the shells are white, pink, green, yellow and blue.

The HTC equipped the One M8 with a 2.3GHz quad core processor (available in EMEA/US) and a 2.5GHz Krait 400 processor (for Asia, China), coupled with a Qualcomm MSM8974AB Snapdragon 801 chipset and an Adreno 330 GPU. The device hosts 2GB of RAM and has two variants of internal memories: 16 and 32GB, expandable up to 128GB.

The iPhone 5C is using a 1.3GHz dual core Swift (ARM v7-based) processor, which is baked up by an Apple A6 chipset and a PowerVR SGX 543MP3 (triple-core graphics) GPU. The Apple model has only 1GB of RAM and three unexpandable variants of built in storage: 8/16/32GB.

Both the One M8 and the iPhone 5C have Li-Po non removable batteries. However, the HTC handset uses a 2600mAh battery with allows up to 20 hours of talk time on 3G, while the Apple model has a small 1510mAh battery which lasts only 10hours when talking on 3G. 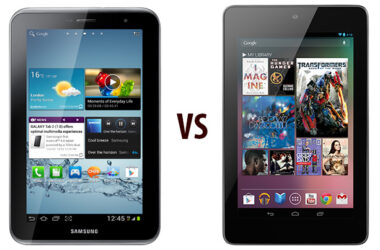 If you have been eyeing Samsung’s Galaxy Tab 2 but also LG’s Nexus 7, here’s a comparison between…