The iPhone 6 has been officially launched, and in two variants, as several rumors appeared to suggest.

However, not many would have been expecting Apple to come out with two versions at the same time, but keen to compete with the likes of the Galaxy Note 4, the iPhone 6 will be available in 4.7 inch and 5.5 inch versions.

The much larger iPhone 6 Plus is clearly a phablet with its large display, but it is a phone that will not feel too large unlike the Galaxy Note series. The iPhone 6, meanwhile, is clearly aimed at phones like the Galaxy S5, which have eaten into Apple’s market in the last few years. Along with the much improved displays, Apple also brings several key improvements to the iPhone range. This also includes the introduction of several new features like NFC, which have been sorely missing up until now.

Android phones like the Nexus 4 have been supporting NFC since 2012. The applications for NFC may have not come into the market in a huge way as the likes of Bluetooth and Wi-Fi direct, but Apple is also keen on reinvigorating this area as well. They have introduced Apple Pay, which will aim to completely replace the credit card in the next few years.

Initially, Apple Pay will be available only in the United States and it will be a while before other regions start to get this feature. For US residents, though, Apple Pay has the possibility to become a key feature right away. Six major banks have given their support to Apple Pay, which will see many others join in the next few months. It is estimated that more than 200,000 merchants will be providing support to Apple Pay out of the box.

The fingerprint sensor on the iPhone has been improved, while in order to cope with the large display, Apple has introduced its signature touch. Double tapping on the home button brings up the icons from the top of the screen closer to the bottom thereby making it accessible even with one hand. This is likely to be a huge boon for iPhone users making the switch to the iPhone 6 Plus, while it is unlikely to be a significant factor of the iPhone 6.

The iPhone 6 Plus should also benefit hugely from the bigger battery. Apple claims that this phone is at least 20% more long-lasting than the iPhone 6. Further, it also has a much better pixel density despite the larger display. Apple is yet to offer a 1080p display on the iPhone 6, which continues with a resolution close to 720p, but it makes its appearance on the iPhone 6 Plus, which can boast of a pixel density of more than 400 PPI. Performance figures from both phones have improved due to the 64-bit A8 processor, but it is unlikely to be the starting point and rightly so.

The GoPro Hero4 is on its way and already it has got tech lovers giddy. Camera lovers expect… 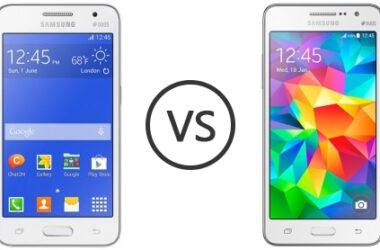 A battle between Samsung Galaxy phones. Only you can decide the winner by reading their specs and price…