iPad Air vs iPad Mini 2 – Offering the Power of Lightness

Both the iPad Air and the iPad Mini 2 were revealed in October 2013 and both are excellent devices. Selecting either of the two depends on your needs.

The size of the screen and the overall size of the two devices are different. The iPad Air has a screen size of 9.7 inches diagonally, whereas the iPad Mini 2 is 7.9 inches. The bigger screen of the iPad Air offers a better movie viewing experience and is superior as a gaming device as well. However, many applications also work equally well on the iPad Mini 2 as well.

Surfing the web and emailing features are also good on both the devices. In fact, reading on the iPad Mini 2 is very convenient, as it has a paperback size and offers an old fashioned method of reading.

As for display quality, both the devices make use of the Retina Display; so pixels are not seen. However, the iPad Mini 2 has a higher pixel density due to the smaller area, though both have the same screen resolution. When it comes to brightness and the contrast ratio of the display, the iPad Air is better.

The screen on the iPad Mini comes with IPS technology and a resolution of 2048 x 1536, with a 326 ppi along with a coating that is fingerprint resistant.  The iPad Air has a slightly lower ppi of 264 pixels.

It also weighs much less at 341g. Considering the screen size, the iPad Air is very portable, but the Mini 2 is still easier to slip into your bag.

Hardware Specs and Other Comparisons

The same processor powers both the devices with the A7 chip along with M7 motion co- processor. This offers a faster experience for gaming and any other demanding application. The A7 is more of a futuristic feature and will be able to deal with future apps that are more demanding.

Both the devices have a dual core processor with a 13 GHz chip, combined with a RAM of 1 GB. Both the models come in 16GB versions ranging up to 128 GB storage versions.

Both the devices have a rear camera of 5 MP and a front camera of 1.2 MP. Both sport improved wireless technology (MIMO) and are upgraded to the 802.11 ac wireless. The iPad Air as well as the iPad Mini 2 come with video recording features at 1080p high definition.

It also offers other features, such as video stabilization; a hybrid IR filter, a 3x zoom for video, tap for controlling exposure and focusing pictures and videos; HDR photographs; back illumination and so on.

Both the devices have a front camera with an HD camera of 1.2 MP with a 720p video recording feature of high definition.

When it comes to selecting between the two devices, it all comes to the display size. If you want a portable device that can fit into your coat pocket, you should probably go for the iPad Mini 2.

On the other hand, if you want a bigger screen, the iPad Air is the device for you, as it has a better display and better contrast and brightness as well. The iPad Mini 2 will probably set you back by about $250 whereas the iPad Air is more expensive at around $500 for the 16GB model. 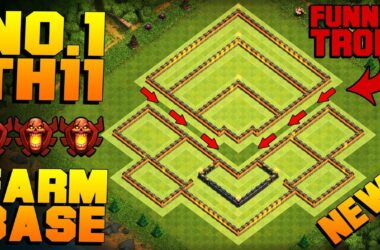 In Clash of Clans, the way you setup your village will make you a good or weak player.…