The competition for supremacy in the large smartphones market is getting crowded with every passing day.

Four years ago, you could say that the main battle in the smartphone market was between Samsung and Apple, with their signature devices Galaxy S2 and iPhone 3GS respectively. Today, everyone wants a piece of the market. And Microsoft is a solid competitor. Since the company bought Nokia, it has produced several excellent phones. The Lumia Icon is one of those and is positioned excellently, to compete with the latest device from Apple, the iPhone 6.

One of the advantages Nokia usually has, with the Lumia Line is the color option. Sadly, the Lumia Icon comes only in Black or White. With so few options to choose and the obvious downside in the build department, Nokia simply canât compete in the design section. Other Lumia devices can compensate the plastic build with several fancy color options, but that is not the case with the Icon. Additionally, the design is flat with sharp edges, a design that is outdated. One of the advantages is that Nokia has placed 3 designated buttons, including the home button on the build of the phone, allowing for more space on the glass display. With the iPhone 6, Apple has adopted the latest trends, including a curvier design. Nokia has an advantage in the screen resolution segment. Even though it packs larger screen display, set at 5 inches, the Icon still manages to produce better pixel density of 441ppi. The density is a result of the OLED display with a resolution of 1080×1920. The iPhone 6, on the other hand, delivers a 4.7 inch Retina screen display, with a resolution of 750×1334, producing pixel density of 326ppi.

The iPhone 6 and Appleâs devices in general, offer top of the art integration between the hardware and the software. On paper, the specs of the iPhone 6 are not that impressive. With a dual core processor clocked at 1.4GHz and 1GB RAM memory, it looks like the handset could use a little boost. However, due to the 64bit A8 chip found inside and the separate M-8 supportive chip, the device runs smoothly and flawlessly. When considering an Apple product, once must always remember that the iOS requires little power to run at its highest rate. When competing against Android devices and their power requiring OS, Apple often comes on top. However, Windows Phone OS is another type of OS that is light on RAM usage and processor speed. And the Lumia Icon delivers excellent performances with the Snapdragon quad core processor, clocked at 2.2GHz. The RAM memory depends on the different version users choose. The version with 32GB built in memory delivers 2GB RAM, while the 64GB version comes with 3GB of RAM memory. Heavy users of video, music, games and movies, might have problems with the Lumia Icon, since there is no slot for a microSD card. While Appleâs device doesnât offer one either, the handset can be bought with 128GB built in storage. The iPhone 6 runs on the latest iOS 8, while the Lumia Icon runs on the Windows 8, with possible upgrade to 8.1.

Both devices have their own advantages and weaknesses in this section. For example, the Lumia Icon has a 20-MP rear sensor, with dual LED flash, optical image stabilization and Carl Zeiss optics, taking snaps of 4992x3744pixels. The iPhone 6 lacks the optical image stabilization and the sensor is only 8-MP. However, Appleâs device has few features for video recording that the Lumia Icon cannot match. One of those is the option for slow motion videos at 240fps and time lapse videos.

Nokia has always been synonymous with reliable phones and long lasting batteries. Such is the case with the Lumia Icon as well. The phone comes with a 2420 mAh battery that can handle almost 17 hours of talk time. That is 3 more hours than what the iPhone 6 and its 1800 mAh battery can produce.

While it is true that the Windows mobile operating system is still in the developing stage, there are more and more applications added every day. The OS is almost at the level of the Android and the iOS, enough to convince some users to make the switch. Additionally, Nokia phones are usually priced lower. For example, the price for the Lumia Icon is $500, while the iPhone 6 is priced $650. 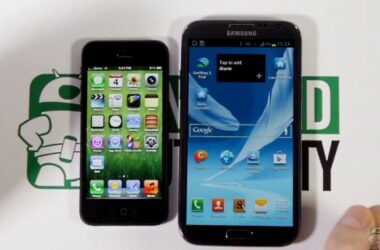 If you’re trying to choose between the Nexus 5 and the Samsung Galaxy Note 2, here’s a comparison…

It is not that far back when people enjoyed the ‘sweet tasting’ Android 4.4 KitKat. Now, people are…