The LG G3 was recently launched and before the launch date, there were lots of leaks, so many people knew what to expect.

Here is an up-close look at how these two phones compare.

The Weight And Build

The G3 is 4 grams heavier, weighing at 149 grams, whereas the Galaxy S5 weighs 145 grams. In terms of the build, the G3 has a metallic finish but it still has a plastic body. This metallic finish is supposed to be scratch resistant and should not attract fingerprints. So it does look quite nice and premium. It also comes in five different colors – red, violet, gold, white and black.

The Galaxy S5 has a perforated back with a dimple-soft finish. It has a good grip when holding it in the hand. Even though it might not have a premium look, it does feel nice in the hand because of the material. One thing this phone has over the G3 is that it is IP67 water and dust resistance certified. It also comes in four different colors – white, gold, blue and black.

Both the LG G3 and the Samsung Galaxy S5 have the Quad-Core 2.5GHz Qualcomm Snapdragon 801 processor. They both also have the Adreno 330 GPU. Even so, you do have to consider that the G3 does have the Quad HD display so you have got a lot more pixels, and this higher pixel density might affect the performance.

The biggest advantage you have with both versions of the phone is that they are both expandable to 128GB via Micro SD card slots. Rumor has it that the G3 will support up to 2TB. 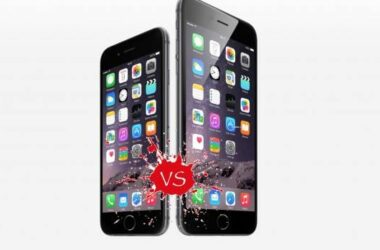 iPhone 6 vs iPhone 6 Plus – The 6 Plus Comes With A Bigger Screen, But What Else?