When buying a new tablet, the first thing you’ll want to know is if the pricing is agreeable and if the specs and features classify it as a low-end or high-end device. The tablets we’re recommending you are top budget and they don’t have super advanced cameras, but they’re very useful for other activities such as web browsing. The screen resolutions are acceptable, but we think that the Kindle Fire HDX7 has more to offer.

Both tablets have the same the screen size of 7inches and they use IPS LCD technology, but the devices support different resolutions and pixel densities: the Kindle Fire HDX 7 renders 1200x1920pixels, which gives a pixel density of 323ppi, and the G Pad supports 800x1280pixels and 216ppi.

The Kindle Fire HDX 7 runs fast like the wind or something like that. Compared to its rival, this tablet has a more powerful processor – quad core Krait 400 clocked at 2.2GHz, and it’s supported by a Qualcomm Snapdragon 800 chipset. The system configuration is completed by an Adreno 330 GPU and 2GB of RAM. The internal storage is available in three variants: 16/32/64 GB, but you won’t be able to expand them, so this could be considered a little disadvantage. The operating system is Android 4.2.2 and the model uses the Fire OS 3 Mojito.

The G Pad 7 tries to keep up the pace with the 1.2GHz quad core Cortex A7 processor, which runs modestly on a Qualcomm MSM8226 Snapdragon 400 chipset with Adreno 305 graphics. This tablet has 1GB of RAM, 8GB of internal storage – expandable up to 64GB and it operates on Android 4.4.2 (KitKat).

This time, the G Pad 7 catches up and beats its opponent with the back camera, which has a resolution of 3.15MP, although it’s quite mediocre. But compared to the 1.3MP camera on the Kindle Fire HDX 7, this is a lot more convenient. Thankfully, the LG tablet has another 1.3MP camera on the front which records at 720p. 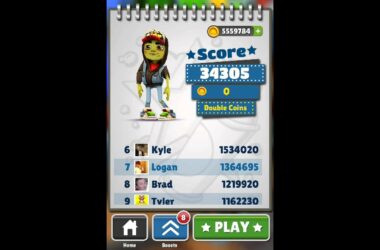 While Subway Surfers may have started off with a bang, its credibility rests on the updates and goodies…