It is not an easy choice to select between the One M8 and the Xperia Z2. Both are top end models. HTC One M8 came in a little earlier and the Xperia Z2 followed a few months later, both being Android flagship phones.

The Z2 looks similar to the Z1. It is a strong design with a completely metal body. It gives a subtle look, whereas the HTC One M8 offers a more premium look and fits very comfortably in the hand.

This cannot be said for the Z2, which has a rectangular block that is not too comfortable. The Z2 is also waterproof as well as dustproof, whereas the HTC One M8 does not have such credentials. The batteries are not swappable in both the devices, but the Z2 has the advantage of a dock connector with a magnetic design offering more convenience while charging.

Both the phones come with an internal storage of 16 GB and support additional storage with a microSDXC card up to a maximum of 128 GB. Both the phones also run on the Android 4.4.2 version. However, they have different user interface overlays, resulting in different features. The M8 also offers support for LTE bands, not available in the Z2.

There are a lot of pre loaded Sony applications, music, videos and games, with many widgets on your home screen.

The HTC One M8 stresses on the quality of pictures and the sensor size rather than the pixel numbers. It offers an Ultrapixel camera, though it comes with a lower pixel resolution of 4 MP. Though the pixel count is low, the sensors have higher capacity for picking light and are more innovative. Sony’s Xperia Z2 comes with a 21 MP camera.

The pictures taken in the Xperia Z2 are surely clearer than those taken with the HTC One M8, offering greater detail and depth. The M8 is also not too impressive in bright light pictures or shadow pictures. However, the software in the HTC One M8 helps the user add excellent effects to photographs, cut and paste pictures and even apply selective refocusing features after taking a shot.

As for video recording, the M8 cannot take 4 K video, which the Xperia Z2 can.

The BoomSound speaker in the HTC One M8 is really impressive and very effective while watching movie clippings on the device. The Xperia Z2 from Sony also offers two front speakers, though they are not so impressive.

Both the phones are flagship phones of their manufactures and are quite similar, though having their own identity. The physical sizes of both the devices are also almost the same, so it all depends on your personal style. The HTC One M8 offers an innovative camera experience, with tricks and effects, very useful for Instagram and Facebook posting.

The Z2 is more balanced and rather understated but it is a premium device, great for music and for videos and the camera is simply superb. The Z2 can be purchased for around $650, whereas the HTC One M8 comes to around $600 for the 32GB model. 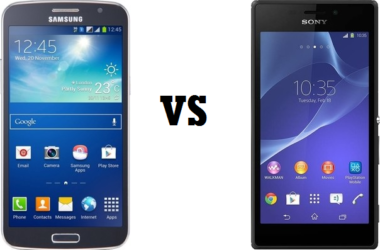 Still a fan of smartphones with large displays? We have two suggestions for you: the Galaxy Grand 2…