Over the last few years, Samsung has grown to become one of the most influential manufacturers of Android devices. It is, in fact, the largest seller of Android devices. With its Samsung Galaxy S5 and Galaxy Note 3, this brand has been able to push mobile technology to another level.

When it comes to choosing between these two devices, which one should you go for? The Samsung Galaxy S5 and Galaxy Note 3 are both fantastic gadgets. However, here is a comparison of the two that might help you in deciding on the better of the two.

The Samsung Galaxy Note 3 was among the very first Samsung phones to utilize the new Samsung style phone design. Initially, Samsung brand phones had a glossy plastic back side but now they feature a textured matte finish.

The Note 3 comes in a leather effect rear with fake stitching along the edges while the S5 comes in a lightly textured dimpled back.

From a distance, the Note 3 is more appealing to the eye than the S5. However, the faux leather on the Note 3 slightly lets it down.

Both phones feel good on the hand with the S5 being of a more manageable size.

Stylus and No Stylus

While the Note 3 lacks in some hardware present in S5, it comes with the stylus advantage. The stylus is pressure sensitive and thus offers a reasonable drawing experience. The stylus implementation is active for all areas of the phone.

It is possible to write freehand as opposed to using the virtual keyboard. This is all thanks to the handwriting recognition software.

On the other hand, the S5 comes with a fingerprint reader. You can use it to lock your phone. You simply swipe your finger over the scanner to unlock or to authorize payment.

The Galaxy Note 3 has a larger screen which makes it possible for the digitizer pen to function. Also, a larger screen is ideal when you want to watch movies, even though the quality of the display is much better in the S5.

The gorilla glass 3 is the latest and toughest touchscreen display. Although it can break when hit very hard, it can remain in the pocket without being damaged.

Which One is the Better of the Two?

The Galaxy S5 is a much more advanced phone than the Note 3. It has a more powerful processor and better camera tech. However, the Note 3 definitely wins for the large screen size and the stylus function. 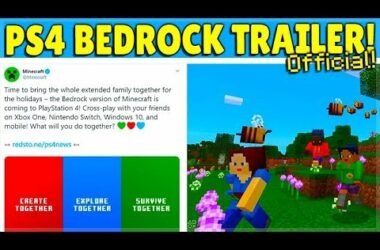 4J studios have officially released a new 1.06 patch for Minecraft PS3. Although the addictive puzzle experience is…