The market is full of latest smartphones from almost all the companies in the arena.

This means that it is time to look forward to the upcoming devices and gadgets that would shape the mobile industry in the second half of this year. The Samsung Galaxy Note 4 is one example. The company has successfully managed to make its mark in the phablet arena with its range of phablets along with the raging success of its smartphones. Therefore, one can imagine that the company is optimistic from its latest smartphone successor. In comparison, the Apple Incorporated also unveiled its latest tablet, the iPad Air. Let us compare between the two devices for their features and specifications.

In comparison, the Apple iPad Air is also expected to be released with improved features and specs. Traditionally, tablets do not come with high-end camera gear. iPad Air is expected to come equipped with 5MP sensor and True Tone LED flash for better camera experience. In case, Apple Incorporated, is sticking to its iPad Mini’s design for iPad Air, the two speakers at the bottom should be replaced with one speaker on the top and the other on the bottom. This would create a surround sound effect when the device is held in landscape orientation. During its announcement, there was no mention of the Touch ID Fingerprinter sensor. A disappointment for the masses as the Touch ID Fingerprinter sensor was an amazing security feature. The device is also rumored to lack the water resistant feature that has been a trend in the present Android based smartphones and tablets.

Both these tablets have pros and cons associated to their design, features and specs. However, until the device is out in the market, all we hear are vague rumors.

The Walking Dead is a shooter game that is based on the television series by the same name.… 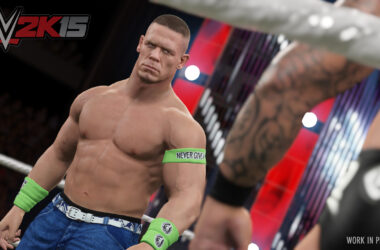 WWE 2K15 Gets First Screenshot on Xbox One and PS4

The screenshot looks amazing, where John Cena gives a menacing stare, to this opponent Randy Orton and the…