This comparison is between the Motorola Moto G and the Sony Xperia Z1. We will be looking at CPU performance, RAM memory and operating systems among others, to see which of these two the best device is.

This device was released in November 2013 and is part of Motorola’s line of low price range devices. To survive in today’s smartphone market, it would have to stand up to some pretty big bullies, but today, it will only face the Sony Xperia Z1.

Although its measurements are 5.11 x 2.59 x 0.46, the phone is still easy to grip and hold, due to its design. If you have any experience with smartphones that come with screens bigger than 4.0 inches, you shouldn’t find this device’s dimensions a problem at all. An Adreno 305 GPU and a 1.2 GHz quad core Corext A7 processor power the handset. That, along with the included 1 GB of RAM, make the Moto G eligible for the newest Android releases , including operating systems, as it is upgradeable to the new Android KitKat.

The screen size is pretty big, 4.5 inches, but the ppi density however is not that big, only 326 ppi. Its maximum resolution is 720 x 1280, and  is comfortable to use at home or in a public venue such as a coffe shop. Under bright sunlight however, it could get a little difficult to see the device’s screen.

You can litteraly talk on your Moto G  all day, as the battery life for this device is up to 24 hours of talk time. Depending on active apps on your phone, the battery life  of the phone when it is used drops to 8 hours. It has a Li-Ion non-removable 2700 mAh battery.

This phone provides good specifications, considering its price range, and also gets the job done. A good battery, which is pretty important for a smartphone, also gives this model a plus. The only flaw with it, is the fact that you will have to get used to reduced visibility on your screen while under sunlight, but that is something you can get past.

The Xperia Z1 was released in September 2013 and it is one of the first smartphones to incorporate dust and water protection. It also has an impressive display, and the phone’s design is worth mentioning.

The sound is a little muted because of the extra layers used on the phone for the waterproof system. The screen, on the other hand, is one of the device’s strong points, being easy to see in any lighting condition. It has 5.0 inches and is very impressive, with a 1080 x 1920 resolution to it.

Sony delivered nothing but the best for the Z1’s camera, as it equipped it with a 20.7 MP lens on the back, and a 2 MP camera on the front. Both cameras are capable of recording 1080 p videos at 30 fps and take HDR photos. You can rest assured that video conferencing is as smooth as it goes with this device.

Intense usage means your phone will last about 5 hours, while 15 hours of talk time are assured. Even though the battery is non-removable, Sony made sure to pack enough juice under the hood , just in case you decide to take a long trip. No less than 3000 mAh are available for usage.

The price tag shouldn’t scare you off, as this device features an impressive screen and camera, and also large battery. These specifications should be enough for you to make up your mind, but let’s not forget about what makes it so special, the water and dust protection.

You can get the Z1 for about $420 while the Moto G is available for around $200, both courtesy of Amazon.com 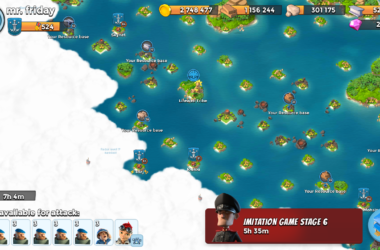 Boom Beach is a freemium game of base building from Supercell. Though there are many other games in…