A lot of videos and trailers have been showcased at the E3 2014 and granted that a lot of these had already leaked or had rumors about them floating around; they have still been considerably well received.

Star Wars: Battlefront 3 has been one of the most anticipated games of this year, not only because it is being developed by DICE, but also because it is one of the biggest budget games ever released. The game is, of course, modeled on the hugely popular Star Wars franchise and therefore already has a very large fan following. The developers have taken their time with this one because the game is being made on such a large budget and scale; and because it is one of the most liked and revered movie franchises, with a very ardent fan following.

The long anticipated trailer was finally shown on Monday, during a presentation at the E3 2014. The new video was not at all what fans had been anticipating. Instead of giving us a glimpse of what the game would look like, this video showed what went behind the making of the game. In a way, it played more on the emotions of the developers from the Stockholm based DICE, than the actual game or the gameplay. There has been a lot of focus on creating an accurate game, especially because of how big the franchise already is. Since even the minutest of details are important, the team of developers visited the Lucas Cultural Arts Museum to look closely at some of the props and artifacts used in the movie. This included everything, from the characters, to the bikes and weapons used in the movie. The main intent was not to capture and recreate the environment of the movie in the game, but also the emotions every single detail of the movie evoked.

Is The Trailer Disappointing?

Some would say that it really is. While most developers show snippets from the game, or showcase its graphics and gameplay mechanics, DICE chose to show behind the scenes footage of the developing team. So yes, some players are really upset that they did not get to see some new footage or a sneak peek into the game. There are also others, who are cheering the well thought out video that shows how hard the development team has worked and to what lengths they have gone, to collect important facts. You could hear the much lauded Star Wars background score from John Williams, complemented with well placed video footage and shots. Every now and then, you could get shots of vehicles and landscapes. In the end, you can see speeder bikes, laser fights and a quick action sequence. If you look carefully, it seems as if all the action is happening on Endor.

While the Star Wars Battlefront trailer is certainly not conventional, it is something that gives you the heart and the emotions that went into making the game. If nothing else, that would make you stop and think about the sweat and tears that may have gone into the making of this game – certainly something to think about. 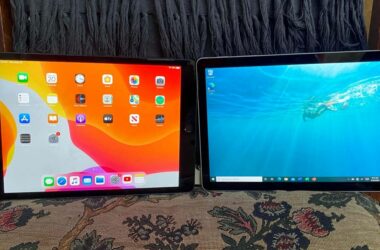 The iPad Air has a large screen and a fast A7 processor, but can it face the challenge…