In this article we’ll compare two great smartphones that excel without a doubt. And if we take a look at their features, we can only say that they are worth their prices. But the S5 is almost 200 dollars more expensive than the LG G3, although one of them has a better camera, while the other one has a longer lasting battery. We’ll compare these devices to help you decide which one you should buy.

Samsung wanted to equip this smartphone with a higher resolution, to compete with Apple’s Retina technology, but instead, the Korean tech giant opted for a resolution of 1920×1080 pixels, while the screen is of 5.1 inches. LG G3 has a 5.5-inch display that supports HD 2560×1440 pixels.

Both smartphones are powered by a 2.5 GHz quad-core Qualcomm Snapdragon 801 processor, but according to some reports, the LG G3 could have run well on an 805 processor as well, but the tech decided to go with the 801 processor.

Both phones come with two variants of internal storage: 16 and 32 GB which can be expanded. The LG G3 runs great with 2GB and 3GB of RAM, while the S5 is equipped only with 2GB of RAM.

The S5 has a more advanced primary camera, of 16 MP, with features such as: LED flash, Dual Shot, geo-tagging, touch focus, image stabilization, face and smile detection etc. The device has also a 2 MP secondary camera. The G3’s primary camera is of 13 MP and has these features: dual-LED (dual tone) flash, optical image stabilization and phase detection/laser autofocus. But there is also a 2.1 MP front camera on the device. 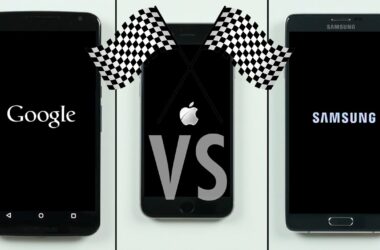 The budget smartphones market is just as competitive as the high-end branch, as leading brands constantly come up…