In the last few weeks, people have been talking a lot about the new Nexus 6 coming up in the tech market. LG denied any speculation that they will be the manufacturers for the new Google smartphone. In recent events, we found out that HTC could be the one behind the new Nexus device. The release date for the new handset is set in the late fall of 2014: either October or November.

Many rumors said that the Nexus 6 will be released at Google’s I/O conference that started on June 25th but no news of the device have arrived so far, so we are inclined to believe that, since the Nexus 5 was released in November, the Nexus 6 will also be released sometime in the late fall. What has been released at the Google event is the new Android, response to the iOS 8 from Apple: the Android 5.0 a.k.a. Lollipop. While the SDK for this operating system can be downloaded starting June 26, the OS won’t be available until fall when we expect the Nexus 6 to be released. While the Nexus 5 sports some killer features, we have here a comparison between this device and its successor to see what changes are to be expected from Google in their new smartphone.

The Google Nexus 5 features a True HD IPS+ display measuring 4.95 inches. This device can render a resolution of 1080 x 1920, while the pixel density seen on the handset is of 445 ppi.

The Google Nexus 5 will feature a larger 5.5 inches display (much like the LG G3 one) that will render a whooping resolution of 2560 x 1440 pixels. The pixel density in the new smartphone is also superior to its predecessor’s: 534 ppi.

As for exterior look, the Nexus 5 has a plastic case and while it doesn’t wow the user from the beginning, it still has a very simple but elegant look, and what is really impressive about the handset is its full HD screen quality. The Nexus 6, as said by Nexus6Me, will probably have aluminum edges with thin bezel.

The processor that powers the Nexus 5 is a Krait 400, Qualcomm Snapdragon 800, which is a quad core working at 2.3 GHz. The device supports 2GB of RAM and two variants of internal storage: 16GB and 32GB (this device does not have a microSD slot, meaning that the memory is not expandable). The handset runs on Android 4.3 Jelly Bean but the OS is upgradable to superior operating systems.

On the other hand, the processor meant to power the Nexus 6 will probably be a Krait 450, Qualcomm Snapdragon 805, which is a quad core working at 2.7 GHz. The device will support 3GB of RAM and two options of internal memory: 16GB and 32GB (we are expecting a microSD slot, meaning that this memory will be expandable). The most likely operating system will be the new Android Lollipop.

The Nexus 5 comes with an 8 MP primary camera, while the secondary camera has 1.3 MP. As for battery, the Nexus 5 has a 2300 mAh battery unit.

The Nexus 6 is supposed to come with a 13 MP primary camera, while the secondary camera will probably have 5 MP. The battery that the Nexus 6 will sport is a 3100 mAh battery unit.

The Nexus 6 will have water proof and dust resistance capabilities that are certified by IP67, or at least that’s what PC Advisor states in one of their articles.

Also, because Nexus 5 has NFC, most likely its successor will have NFC as well.

While the Google Nexus 5 is priced at $379.03, the Nexus 6 will cost somewhere around $655. While it is pricier than its predecessor, many of the features that the smartphone will have succeed the ones the Nexus 5 presents. 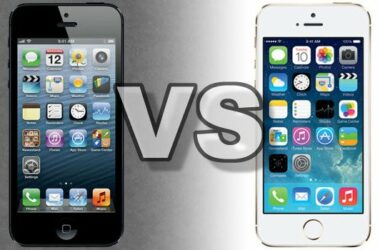 If you are looking to compare between iPhone 5 and iPhone 5S, you will find plenty of differences…

Google decide to pay more attention on the new Nexus 8, instead of the Nexus 10 2. We…