The Tab S 10.5 is one of the two variants of tablets unveiled by Samsung two weeks ago. Today, we’ll compare the bigger Tab S tablet with Apple’s iPad Air, which was released last year. So, both of the devices come in LTE, non-LTE or WiFi variants, but only the Tab S has a fingerprint scanner.

The Tab S 10.5 looks like the S5 on the outside, having a perforated textured rear. The iPad Air has an aluminum chassis and makes it have a premium appearance.

The Tab S is running on the Android v4.4 KitKat OS and has Samsung’s TouchWiz UI, while the iPad Air is running on Apple’s iOS 7, which can be upgraded to higher versions.

The iPad Air takes pictures with its 5MP rear-facing camera and also has a 1.2MP front-facing camera. The Galaxy Tab S has a more advanced primary camera – 8MP (LED flash) and the secondary camera is of 2.1MP.

Both of the phones come with non-removable batteries, but the Tab S is equipped with a 7900mAh battery with Ultra Power Saving mode, and it lasts 11 hours when it’s used continuously, while the iPad Air has a 8820mAh battery which lasts 10 hours. 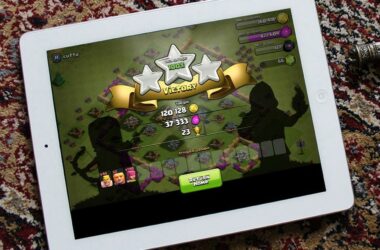