HTC One M8 was released in March and it received a lot of attention from the representatives of tech industry.

HTC came again, with a high quality smartphone – a great alternative for most of the overrated market handsets.

HTC One M8 is a little bigger than the original HTC One. It comes with a quad core Snapdragon 801 processor, with 2GB of RAM and Adreno 330 GPU. HTC One M8 comes with a great front camera of 5MP.

Here are the five reasons why you should buy this great smartphone from HTC.

One of the most important features of HTC One M8 is that it has, by default, the latest Android 4.4 KitKat OS which comes along with new software features for your device.

Besides Android 4.4 KitKat OS, it also has HTC’s self-made user interface called HTC Sense UI 6.0. According to reviews, the user interface (UI) is very user-friendly and works like a charm.

HTC One M8 comes with a Full HD 5inch Display, making it a very competitive smartphone, since this is one of the latest trend screen displays.

HTC One M8 comes with two types of internal memories: a 16GB one and a 32GB one. This phone also accepts microSD cards, to expand the storage up to 128GB.

Zoe Camera will help you take photos easily. Let’s say you want to take an instant photo to somebody but timing is not your strength. This feature will record a video and while it’s filming, it can also take photos. The default video recording is 3seconds, but if you keep pressing the record button, it will pass that time. 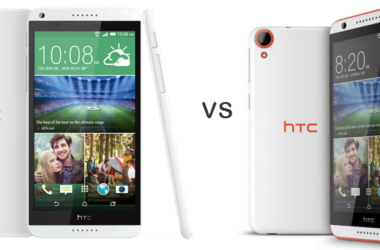 HTC One X+ vs HTC Desire 816 – Price and Specs Comparison

Two devices from HTC…wondering witch one is the best? Here is the information that you need to decide…