Customers, thus, have a wider range of options to choose from when it comes to Roku. Apple, on the other hand, does not have any stick set up. Also, Roku is smaller in size and weighs just 142g while Apple is slightly bigger with a weight of 272g.

Roku seems to be taking the upper hand here as far as the budget and portability are concerned.

Although both the devices possess 512 MB RAM, Apple TV is ahead in the race with a single core processor with a 2GHz rating. This fastens things to an incredibly smooth state, as compared to the 900 MHz dual core processor of Roku 3. However, Roku has an external storage memory card for data storage which earns it some brownie points.

Apple boasts of its Airplay streaming that is exclusive with its wireless streaming. Airplay lets its users stream the content steadfast at a click. While Apple TV lets you stream the content already on your Apple Ecosystem, Roku does not have an ecosystem of its own!

But then what use is the speed if you do not have enough content to be streamed anyway? That is where Roku excels far ahead of Apple TV. Roku provides its users with 750+ games and more than 1000 applications while Apple has a sad list of 10+ games and 15+ channels to entertain – all of which are mandatorily Apple supported. To level the ecosystem trouble, Roku lets its users avail anything and everything without any strict supporting rules. Also, Apple TV lacks the much-needed Amazon Instant TV but Roku possess the same, although it does not have HBO Go or Bloomberg.

The ace feature of Roku is its cross-platform search. Countless users have detoured to Roku due to Apple’s time-consuming search option. This makes the user type and enter the same query in a million places before finding the desired copy. On the other hand, Roku lets its users enter a query once and that is automatically checked in all places to show up the relevant information.

The connectivity options of both the digital media players are almost alike but Roku has a heavy disadvantage due to non-availability of Bluetooth support. To neutralize this, Roku is compatible for Android and iOS users, while Apple is compatible only for iOS.

Roku has a headphone jack on its remote while Apple doesn’t come with any such option and is topped with more difficult actions. At the time of installation, Apple users would have to operate the virtual keyboard with its bare-minimum remote buttons. Roku provides enhanced motion controlled gaming while Apple barely has enough games! The sole, exclusive feature of Apple is its Airplay feature that lets the users avail the contents on their other devices with supreme ease.

Roku has been favored quite a lot by the customers, with a 5 Million+ user base but Apple outsmarts it with a customer base of over 8 Million. Concluding, Roku is clearly for the die-hard-Television fans, while Apple TV is ideal for Android fanatics and Apple lovers. 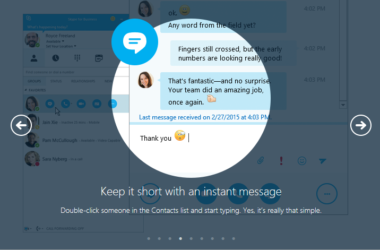 It’s rather astonishing to see the changes that video telephony has undergone, bearing in mind that it has…