Many of you might probably aspire to create your own phone by adding a feature or removing something that you might never use. This kind of building your own phone concept or a BYO concept includes a modular device. You can add features or remove them whenever you wish. For instance, if a new processor is introduced in the market, you can change the chip of your phone, without having to go in for the latest phone model.

Phonebloks concept is focused on the capability of switching out the components of a handset, similar to how you can change ringtones. The Advanced Technology and Products group of Motorola is currently working with Dave Hakkens, the creator of Phonebloks. They are making use of an endoskeleton with modules, opening up the process to develop and the community.

Project Ara has Google behind it with the Motorola brand on it. The Motorola Projects have the mission of doing for hardware, something similar to what Android did for software. It aims at creating an increasing innovation. The Project Ara division will integrate with Google’s Android team. The work progress is going to be considerably accelerated using Google’s resources.

Project Ara has been on for the past two years and includes modules as well as endoskeleton. The endoskeleton is the frame holding the modules. The module could be a keyboard or a new display, a processor for an app and so on.

According to reports, Google is expecting a phone from the Project Ara to cost around $50. With Moto X, users are already being offered many customization features from Motorola. It can really bring down the prices of smartphones, because the user will only be paying for features that he needs.

Project Ara will bring in the future of modular smartphones. The members of the Ara development team have shared some of the inside information on the way the phone is expected to operate in various modules. The Ara smartphone will have interchangeable segments, known as modules. These contain hardware as well as software and the components essential for the phone. The Ara team will create the screens and hard drives.

However, it is also open to developers who are ready to actively participate in the development of the project. The platform will be maintained for facilitating developers, as everything cannot be micromanaged or managed internally. However, developers may not be able to access the Endo, which is the foundation of the phone. This is because the Endo has to be consistent for the entire device, as the modules communicate through it. It communicates the information from one module to another and also helps deliver power. It enables all the information between modules to be transferred effectively, without the phone crashing.

In addition, the Ara Project team is also concerned about the Endo’s durability. This can be achieved by providing interconnections, which avoids wear and tear resulting from the modules that slide in and out. The team is also considering the use of super capacitors instead of batteries, so that it can have a longer life cycle.

The module shells are also expected to be 3D based. The Kit for developing the module is now available and developers can start working on it. Many modules are already being developed, with many big developers involved as well.

It is of course too early to predict whether the Ara smartphone will be able to replace the current generation of smartphones. However, after a year of its release, we can get an idea about the future of smartphones and how it will change. 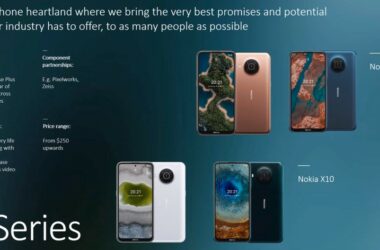 If have been eyeing both Samsung’s Galaxy Core handset and Nokia’s X, here’s a comparison between the two…

The reported $100 Google smartphone will not be a high-end model as the other Nexus devices, but entry-to-mid…