But they are often compared because they belong to the same product category – smartphones. Let’s compare iPhone 5S and Galaxy S4 which are high-end smartphones from two leading manufacturers.

iPhone 5S has several good camera features. Though the primary camera has only a 5 megapixel sensor, features like aperture size of f/2.2, five-element lens, hybrid infrared filter, True Tone flash, backside illumination work together to improve the quality of images and videos shot using iPhone 5S. The hybrid infra red filter prevents infrared light from reaching the sensor thereby preventing degradation of images caused by color temperature. The True tone flash also works to improve the quality of the images by reducing the effect caused by color temperature. The phone has a dedicated camera button that allows you to use the camera without digging into the menus. iPhone 5S is equipped with a 64-bit CPU and a dedicated motion processor that improves iPhone’s multi-tasking capabilities.

Galaxy S4 is equipped with a bigger display. The Super AMOLED display in Galaxy S4 measures 5-inches that is 1-inch larger than iPhone 5S. The pixel density of AMOLED screen is higher at 441 pixels-per-inch and the resolution is around 1080-by-1920 pixels that is good enough to watch HD videos. Galaxy S4’s display is protected by a scratch-resistant Gorilla glass. The primary camera fitted in Galaxy S4 is a 13 megapixel camera having a resolution of 4128-by-3096 pixels and a LED flash to improve quality of images clicked in low light conditions.

Galaxy S4 is equipped with a quad-core processor running at clock speed of 1.6 GHz. The phone has 2GB RAM and you have phone variants with different internal storage options starting from 16 GB up to 64GB. You also have an option to add storage space up to 64 GB through a microSD card. The secondary camera in Galaxy S4 is 2-megapixel that is better than 1.2 megapixel front camera in iPhone 5S. Galaxy S4 offers several camera friendly features like touch focus, auto focus, Geo tagging, simultaneous recording of HD videos and images, and Dual shot that lets you click the images from rear and front camera at the same time. 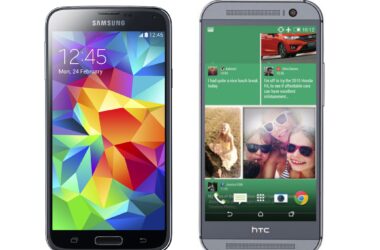