Samsung has the biggest lineup of Android smartphones and tablets.

The names of Samsung phones sometimes confuse you and it is very hard to distinguish between two Samsung phones by just looking at them. If you are looking for a smartphone with screen size between 4 to 5 inches, you should take a look at Grand Duos and Core Advance that belong to Samsung Galaxy family. Grand Duos is a dual-SIM phone whereas Core Advance will be a single SIM phone. Grand Duos was released in January 2013 which means it is quite old in comparison to Core Advance which is expected to be released in April 2014. Let’s compare these two phones from Galaxy family and try to know which has good features.

Grand Duos has a 5-inches display having a resolution equivalent to 480-by-800 pixels that translates into a very low pixel density of 187 pixels-per-inch. Core Advance is expected to have a 4.7 inch screen with the same resolution as Grand Duos and pixel density equivalent to 199 pixels-per-inch. Both phones have a capacitive TFT touchscreen capable of displaying 16 million colors. None of the phones have any protective glass or additional features in the display section of the phone.

The price of a factory unlocked Grand Duos is around $249.99 while price of Core Advance will be approximately $240. 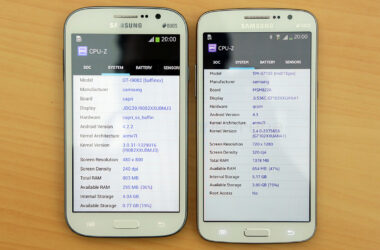